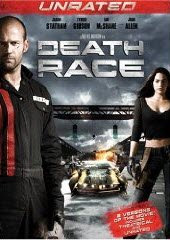 It has been a while since I have done a book or movie review mostly because I have been so busy with work and school. I did get a chance to check out Death Race (Unrated Edition)

this past weekend and was plesantly surprised!
The movie stars Jason Statham who is one the typical tough guys out there and is probably best know for "The Transporter". Long story short the US economy collapses in 2012 (funny eh) and private industry takes over the penal system because crime is so out of control government cannot handle it any longer. Out of this, gladiator type games are broadcast over the Internet to people who "pay per view". When that gets boring the Death Race is born.

The main character (Statham) is setup for his wife's murder and sent to prison...where surprise, surprise we learn he was formerly a professional car racer. Needless to say he is recruited for Death Race.

The movie is action packed. When I told my wife what we were going to watch she said "oh boy...sounds like a stinker", well by the end of the movie even she thought it was a great action movie.

No Oscars here just action packed gratuitous violence. The way the Race is run and the ways some of the drivers die is interesting to say the least...

Here is the description from Yahoo movies:
"Terminal Island, New York: 2020. Overcrowding in the U.S. penal system has reached a breaking point. Prisons have been turned over to a monolithic Weyland Corporation, which sees jails full of thugs as an opportunity for televised sport. Adrenalized inmates, a global audience hungry for violence and a spectacular, enclosed arena come together to form the 'Death Race', the world's biggest, most brutal sporting event. Five-time NASCAR champion Jensen Ames is a man who has become an expert at survival. After eight years of hard time, he has only six weeks before reuniting with his family. But when Weyland demands a driver to headline the big game, Ames is forced to submit. Donning the costume of mythical rider Frankenstein, the racer becomes an instant crowd favorite, an unequaled sporting superstar. His face hidden by a metallic black mask, one convict will be put through a brutal three day challenge, with the trophy being the ultimate prize: freedom. The only catch is that he must survive a gauntlet of the most vicious criminals in this post-industrial wasteland to claim it. Driving a monster car outfitted with machine guns, flamethrowers and grenade launchers, Ames must now kill or be killed to win the most treacherous spectator sport on Earth: 'Death Race'."

I have to say both the wife and I really enjoyed this movie. The concept is not novel but the story was interesting (a little predictable) and as I said this movie is ACTION PACKED.

Give this one a watch and I am sure you'll enjoy it...

Buy Be A Survivor stuff! ~ Donate to Be A Survivor! ~ Join "The Survivalists"!
Posted by flea at 10:58 AM
Email ThisBlogThis!Share to TwitterShare to FacebookShare to Pinterest
Labels: movie reviews