Most of my regular readers know that I am a Ham radio operator. In 2006 the wife and I drove to the Dayton Hamvention. For those who have no idea what that is...it is the largest gathering of Ham radio operators in the world, a type of flea market/convention. It is the biggest event in Ham radio every year. If you are a Ham you should try and get there at least once in your life.

The Hamvention is famous for the colorful characters who show up there. The wife and I arrived in Dayton Ohio and pull into the arena parking lot to pick up our tickets and what is the very first thing I see? A car with so many antennas on it that it can only be called one thing..."the porcupine". I included the pictures I took below. 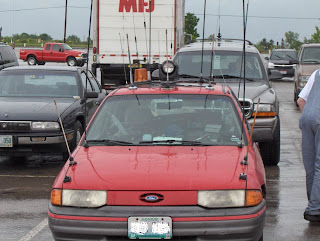 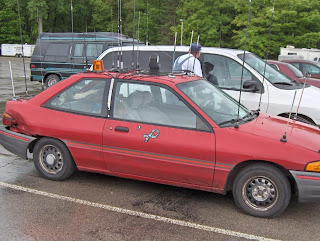 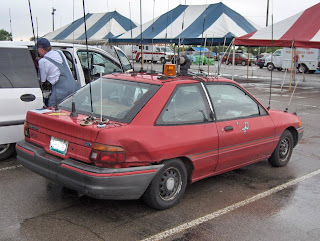 I must say to be entertained that quickly...I had only just arrived; it was very promising and I was not disappointed. The show is well worth the price of admission. The real purpose of the the Hamvention is for vendors to show off new products and for people to sell all kinds of commmunication related stuff. Like I said if you have never been to the Hamvention and are interested in communications you should try and check it out. The "colorful" characters are a bonus!!!!

Buy Be A Survivor stuff! ~ Donate to Be A Survivor! ~ Join "The Survivalists"!
Posted by flea at 7:56 AM
Email ThisBlogThis!Share to TwitterShare to FacebookShare to Pinterest
Labels: communications