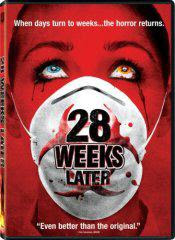 My next review is one of those movies with a concept that make my knees shake...28 Weeks Later (Widescreen Edition)

. The orginal "28 Days Later" scared me because it introduced the world to "the infected", souls exposed to the Rage virus who could haul some ass (READ run real fast). Gone were the shambling zombies of George Romero and in their place came tireless killing machines that could run down Carl Lewis in his prime. This scenario is also much more likely than the "Living Dead" series as the rapid infection of a population after the accidental release of some government virus is a WHOLE LOT more plausible than many of us care to believe.

This movie is set several months after the orginal. During that time the Rage virus has burned itself out and the infected have slowly died of starvation. The government feels the resettlement of the UK is just a peachy idea at this point. They start sending folks back to carefully constructed camps to begin the resettlement when a monkey wrench gets thrown into the plan. There is always a monkey wrench isn't there....well this results in another outbreak of the Rage virus that the military once again goes to great lengths to try and contain.

I can't say this is better than the original because it is not. It is a great movie if you are a fan of the genre and even leaves the door open for another sequel...which of course I would welcome. I enjoyed it immensely and I even bought the video for my collection...which is small by many people standards as I only buy movies I have seen and can envision myself watching again.

There is real action from the time the movie starts as it sets up the rest of the film. The concept of the film is believable and well done. They could have really hosed up a sequel but they didn't...in contrast they did a fine job with a good script. The acting is good and you feel some genuine emotions for the characters in this film.

From IMDB:
"28 Weeks Later picks up six months after the Rage Virus has decimated the city of London. The US Army has resorted order and is repopulating the quarantined city, when a carrier of the Rage Virus enters London and unknowingly re-ignites the spread of the deadly infection and the nightmare begins... again."

All in all a good effort and I recommend this to anyone who enjoyed the first one or who enjoys this genre of film.

Buy Be A Survivor stuff! ~ Donate to Be A Survivor! ~ Join "The Survivalists"!
Posted by flea at 5:00 AM
Email ThisBlogThis!Share to TwitterShare to FacebookShare to Pinterest
Labels: movie reviews