Morse code...what can be said that has not been said already. It is one of the most relaible ways to communicate when transmitting over long distances. Ham radio operators are able to pick up the dit's and dah's where voice just won't penetrate. 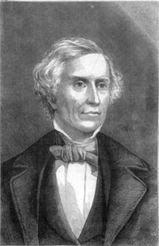 Morse Code was invented by Samuel Morse. He conceived the basic idea of an electromagnetic telegraph in 1832, and produced the first working telegraph set in 1836. This made transmission possible over any distance.
Morse code does not have to be beeps over a telegraph, it can be simple tapping on a wall or a pipe or even flashes of light using your flashlight. Think about this for a second, at night you can effectively communicate with someone within visual distance (which on a clear night can be substantial) using nothing more than Morse code and a flashlight...pretty amazing stuff.

Morse code used to be a requirement to obtain the general and extra class licenses in ham radio but no longer. All you need to obtain those licenses is to pass the written exams, I am all for the no Morse requirement for general but I think they should have maintained a 5 words per minute minimum for the extra class license. If you are an extra you should have some mastery of Morse code in my opinion. 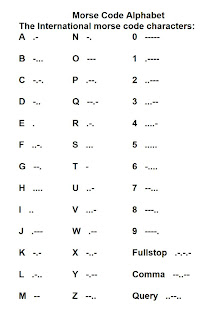 Morse code is one of those things that it never hurts to know. There are many stories out there of people being saved by tapping on pipes and captives communicating by tapping on cell walls. In one memorable scene from a movie called Untraceable

a cybercrime agent whose death is being televised live over the Internet gives clues to his fellow agents by blinking Morse code to them. I have a Morse code trainer I still use from my days of practicing for the general test...while no longer required to know (for ham radio) it is great for brushing up on this valuable communication method. Up your chances of being a survivor and spend some time learning Morse code today!

Here is cool Morse code trainer - This will get you used to hearing it...plays back what you type in.

Here is a link to one of my ham radio posts if you are interested in getting started!

Here is a link to Ham University, this is the trainer I use. It is not free and you need to pay for it. It is a good one though.

Buy Be A Survivor stuff! ~ Donate to Be A Survivor! ~ Join "The Survivalists"!
Posted by flea at 5:00 AM
Email ThisBlogThis!Share to TwitterShare to FacebookShare to Pinterest
Labels: communications