Weekend Roundup:
God, where do the weeks go? Yes it is once again for the weekend roundup. Let's get this party started...shall we? 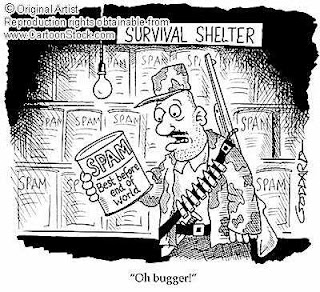 On My Mind:
Well it has been a better week this week...I am in a good mood and have been for quite a while. I did get the 200 rounds of Wolf 7.62 I ordered from Cheaper Than Dirt a few days ago. I also got my annual order from the US Mint. I purchase a Proof Silver Eagle and a Silver Proof Set every year and have done so since 1999. Funny enough the sets I have from 99 have gone up dramatically in value because it was the first year for the fifty state quarters program. The Silver Proof Set from that year runs between $300-$500 now...not bad especially since I bought two that year! The Silver Eagles are one ounce of .999 silver and I think they are gorgeous. I don't collect coins just these annual sets for their collectable value but also for their precious metal content.

On The Blogs:
Scout In Life Homestead and Survival Blog
The Forgotten Cottontail

Stealth Survival
Dillo Invasion And Practice Against The Invading Hoardes

The Tip:
The wife an I don't throw the grease left over when we cook bacon away. We have a jar we pour it into and we keep it in the refrigerator. It turns hard and almost looks like Crisco or lard and is fantastic to use when cooking your meals instead of always using butter or oil. Hell, EVERYTHING tastes better when you add bacon flavor!

Buy Be A Survivor stuff! ~ Donate to Be A Survivor! ~ Join "The Survivalists"!
Posted by flea at 7:00 AM
Email ThisBlogThis!Share to TwitterShare to FacebookShare to Pinterest
Labels: weekend roundup