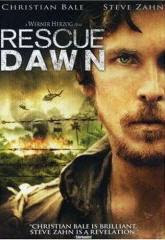 I sat down last weekend with the wife and we put in the next movie I am reviewing: Rescue Dawn.

The movie stars one of my favorite actors out there right now Christian Bale. He has been in TONS of great movies including American Psyho (GREAT), Equilibrium, Batman Returns, Reign of Fire, The Machinist (GREAT). He is just such a versatile actor it is scary.

The movie is not one of his best but he does a good job in it nontheless. The movies plot is basically about a Navy Pilot (Bale) who is involved in air raids prior to the US "officially" getting into the war in Vietnam. He is shot down and is captured by the Viet Cong. He is marched trhough the jungle and eventually placed in a prison camp where he meets a few other Americans. He organizes and executes an escape plan, I can't really give you any more details without ruining the plot but things don't always go according to "plan".

The movie is based on a true story and was directed by Werner Herzog who is a filmmaker I enjoy. He did a fantastic job on the Timothy Treadwell documentary and I have great respect for his work.

Once again this is not a terrific movie, it is a "good" movie...one of those reliable ones you can sit back and enjoy and just appreciate it for what it is.

Description from IMDB:
"In 1965, while bombing Laos in a classified mission, the plane of the German-American pilot Dieter Dengler is hit and crashes in the jungle. Dieter is arrested by the peasants, tortured and sent to a prisoner camp, where he meets five other mentally ill prisoners. He becomes close to Duane and organizes an escape plan; however, the unstable Gene opposes to Dieter's plan. When they discover that there is no more food due to the constant American bombings in the area and their guards intend to kill them, Dieter sets his plan in motion. However, an unexpected betrayal split the group and Dieter and Duane find that the jungle is their actual prison."
This movie gets 3 chicken pot pies out of 5!

Buy Be A Survivor stuff! ~ Donate to Be A Survivor! ~ Join "The Survivalists"!
Posted by flea at 1:39 PM
Email ThisBlogThis!Share to TwitterShare to FacebookShare to Pinterest
Labels: movie reviews