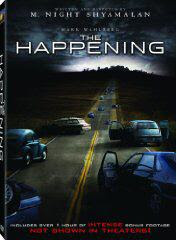 Ok I am a big fan of M. Night Shyamalan. I loved most of his movies and thought he was a great and talented filmmaker, until I watched The Happening

the other night. This movie absolutely was the biggest diappointment for me to come in the form of a movie. The plot was lame (the premise was smart), the acting was totally amatuer and most importantly the special effects were some of the worst I have seen, I could have done them better with Photoshop. The death scenes were so fake, the blood looked CGI and it goes down from there. The one highlight of the film was John Leguizamo...his acting was solid...Mark Wahlberg looked like a deer in the headlights and I think he realized what a stinker this was as it was being played out.
There is basically and "event" (it is a real smart premise like I said - can't say more for those of you who actually are willing to see this) that causes people to loose their survival instinct and kill themselves. They kill themselves in some pretty creative ways but that is where the special effect totally blow it. They look like college kids with a camera and some beer did them to be honest.

This guy summed it up nicely in his review of the movie on Amazon.com:
"Someone save M. Night Shymalan from himself. For a man who insists on writing, producing and directing his own movies, he's digging an early grave for his career as a filmmaker and "The Happening" has breached the six-foot mark for his burial. Sporting a lousy script and lousy performances to boot, Shyamalan's much talked-about first R-rated film is a travesty of filmmaking that deserves no better than a 30% rating. If it were a tomato, it'd be pretty darn rotten."

I can't say enough bad stuff about this movie so I will sum it up as:
This movie sucked...don't waste a dime on it unless you can see it for free.

I give this movie 1 turd out of five and that is being kind.