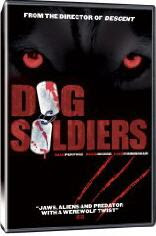 Todays movie review is not so much as review as sharing one of my favorite movies with y'all. The movie is called Dog Soldiers

and is great fun. I first saw this movie which was released in the theater in the UK (not US) on the Sc-Fi channel and immediately went to Amazon.com and bought a copy.

The movie is about a band of British soldiers who get dropped into the Scottish Highlands on a training exercise. Things go horribly wrong and they end of fighting for their lives against a pack of werewolves.

There are circumstances surrounding these Royal Marines getting dropped in the area but I can't share too much without ruining the plot. The movie is scary but can be at times "campy", if you know what I mean...in the vain of a movie like An American Werewolf in London. There is some great (and sick) humor in the movie and the gore is pretty good as well.

The special affects aren't the best but the werewolves are well done and very scary, especially when moving in the shadows and mist at dusk. I have to say everyone I have recommended this too has liked it as well. The same crew of actors from Doomsday are in this flick.

The movie is great fun and I have watched it several times myself so there is some "rewatch" value in this one. Check it out I think you like it.

From Yahoo Movies:
"A group of soldiers on a training exercise in a remote Scottish forest become entangled in a bloody battle with a gang of werewolves."