Movie Review: Right At Your Door 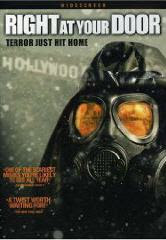 Next up in the movie review department at Be A Survivor is Right at Your Door.

The wife and I watched this one over the weekend, I believe Netflix recommended this one to me based on previous movies I have rated. We settled down put the disc in and were pleasantly surprised by a movie that I had never even heard of before.

The movie takes take place in Los Angeles, CA. The premise of the movie is basically there is this guy who is an unemployed musician and is married to a woman that works in downtown LA. One day she gets up and goes to work, the husband is home listening to the radio and all of the sudden there are all kinds of news bulletins and alerts that multiple dirty bombs have gone off in downtown LA.

During the course of the movie we learn that the dirty bombs actually contain viral agents so the entire city is quarantined with police shooting people trying to leave. Those at home need to seal their houses before the fallout gets to them. This is really where the movie starts, the husband at first tries to find his wife which is futile so he begins to "seal" the house and wait. I really can't tell you more without ruining the plot but this movie shows the need to be prepared. After the bombs go off people are at the store trying to buy water and food as well as plastic and duct tape to seal their houses. This shows that stores will be looted and or wiped clean within minutes of any disaster.

Even are government which can't seem to figure out how to pay less than $350 bucks for a toilet seat recommends you have enough plastic sheeting and duct tape to completely seal one room in your house in the event of a chemical attack. This would be in addition to all the normal preps we recommend here of course.

The movie is filled with twists and turns and even some "evil government scientists" make a cameo or two as the story progresses. I was really surprised, the writing for the movie was pretty good and there really aren't any "major" stars in it all. Like I said I had never heard of it until Netflix passed me the recommendation.

Is this one of the greatest movies ever written? Hardly...it is good entertainment you can sit back and enjoy and not have to think to much about and like I said there are some valuable survival lessons if you pay attention.

This movie gets "three snaps in a semi-circular motion" out of 5!