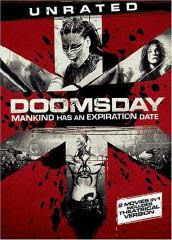 In a new segment here at Be A Survivor I will be reviewing some of the movies I enjoy that I think are relavent to survival, including everyones favorite apocalypse, zombie and action movies. The fist movie to go under the microscope is Doomsday (Unrated Widescreen Edition).

What do you get when you cross The Road Warrior,

and a healthy pinch of imagination? You get this movie, Doomsday.

you will recognize most of the cast. It seems they all enjoyed each others company and came back from round two of working together. The only really big name actors in this movie is Bob Hoskins, Malcolm McDowell and maybe Sean Pertwee who you may remember as "father" from the Christian Bale movie Equilibrium.

This movie has it all: Road Warrior type chases, seemingly super human female hero, knights in shining armor (literally, I am not kidding), deadly viruses and much, much more.

Here is the synopsis from Yahoo Movies:
"The year is 2008, and a pandemic threatens to wipe out the whole of the human race. For many in the United Kingdom--the epicenter of the outbreak--the end is nigh, so why bother to keep count? Within days of detection of the Reaper virus millions are infected in Scotland, the killer disease's home turf. Government has no choice but to declare the country a 'hot zone' and quarantine the populace in hopes of containing the Reaper's spread. What was once Scotland is now a forgotten No Man's Land, with the Reaper given free reign to annihilate the population sealed inside. A quarter of a century later, with a new outbreak of the Reaper resurfacing in London, it becomes apparent that the government's best laid plans have gone completely, bloody awry. Department of Domestic Security (DDS) Chief Bill Nelson is summoned to meet with the prime minister and the true power behind his office, Michael Canaris, who reveal satellite photos of Reaper survivors in the hot zone. And survivors must mean there's a cure. Nelson quickly assembles a crack team of specialists to venture into the forsaken land and retrieve the counteragent to the virus. For the tough and efficient commanding officer, Major Eden Sinclair, the assignment represents a disquieting homecoming. Twenty-five years earlier, she had been shoved into one of the last evacuating military choppers and flown to safety--forced to leave her mother behind. Once on the other side of the immediately re-secured border, the squadron is on its own, venturing into a ghoulish terrain of corpse-strewn, forlorn cities. All too soon, however, the crew meets up with a pack of feral survivors, and finds itself unwittingly standing in for the callous government that turned its back years before."
End

The movie is pretty enjoyable but stretches believablity to the limit. There is your typical organization with ulterior motives and a healthy dose of action to keep you interested. The movie almost seems to be making fun of the films that is lifting from in some ways. There is some humor and A LOT of violence and gore. My wife and I both enjoyed the film as it did provide a great story and lots of eye candy.

I would recommend this movie as a great Saturday night flick to enjoy with some friends and popcorn.

Buy Be A Survivor stuff! ~ Donate to Be A Survivor! ~ Join "The Survivalists"!
Posted by flea at 4:30 PM
Email ThisBlogThis!Share to TwitterShare to FacebookShare to Pinterest
Labels: movie reviews