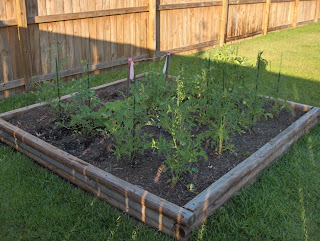 This years garden was planted shortly before Mother's Day. I built a raised garden from some landscaping timbers. I only have one of these now but next year I plan to build another one just like right next to it. I did a raised garden because our soil is clay and basically sucks.

I built the raised part so I would only have to remove so much clay and could back fill with nice soil. It took roughly 80 - 40lb bags of soild to fill the area I cleared. I also mixed in a bag or two of manure and a bag or so of potting soil as well.

This year my wife has started composting so I have been adding that "black gold" to the garden and mixing it around before I planted anything.

There are some pictures of the compost bin I built with some pressure treated 1x4's. Before I filled it with dirt I coated it with Thompson's Water Sealer to help keep it from rotting. 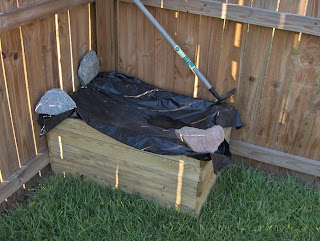 My wife saves all the organic waste we generate like egg shells, coffee grinds, onion skins, etc. Once she fills a coffee can it gets buried in the compost bin on one side. The next time she buries it on the other side and the cycle alternates like that giving the waste time to break down. You can see how black the dirt turns from all that organic goodness breaking down and being mixed around nicely. This system seems to be working very nice for us and I think we will continue in this fashion. 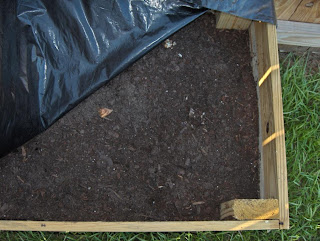 The garden consists of 10 tomato plants, 2 grape tomato plants, 2 cukes, 4 peas, 4 green beans and 1 watermelon plant. It's a little more crowded than I like hence the reason for the planned expansion next year. I love tomatoes and would like to plant more like 20 of those. I recently discovered canning and figure I can preserve any tomatoes we don't eat before they go bad so I am not worried about the 2 of us eating production from all those tomato plants. 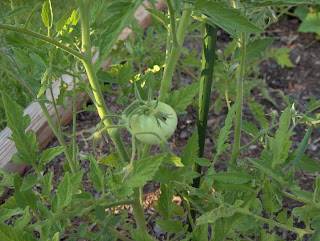 We also planted an herb garden which for us is a first. We started off simply with basil, parsley and dill and we'll see how we fare with that before getting more exotic. I really do enjoy gardening. My grandfather had a small farm when I was growing up and I fondly remember walking in the fields and the HUGE sunflowers he would grow. He continued on a smaller scale when he moved in with us after my grandma passed. I definitely owe my green thumb to him and my mother who took great pleasure in giving away bags full of tomatoes to the neighbors.

If you have a small patch of land consider growing some of your own vegetables. It is a valuable skill to learn. You can supplement your food stores and most of all nothing tastes quite as good as something you have grown yourself.

NOTE: Some folks asked questions regarding pressure treated lumber and whether the chemicals will leach into the soil. I personally (read: my opinion) don't think it's major issue but here is a well written article to help you decide for yourself:
http://www.taunton.com/finegardening/pages/g00028.asp

Buy Be A Survivor stuff! ~ Donate to Be A Survivor! ~ Join "The Survivalists"!
Posted by flea at 9:00 AM
Email ThisBlogThis!Share to TwitterShare to FacebookShare to Pinterest
Labels: gardening