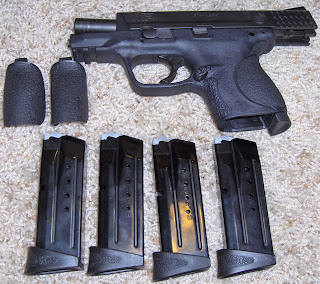 I am interested in obtaining my concealed weapons permit for South Carolina. I had a small amount of money on me from the stimulus check the government was nice enough to send me and wandered into one of the local gun shops. I asked the gentleman about a nice weapon I could use for concealed carry.

He walked to case and handed me a Taurus Millennium. I looked at the gun and immediately handed it back to him. I don't know many things, but I do know you don't scream fire in a crowded movie theater and don't buy any Taurus semi-auto pistols (see note below). I am not a Taurus hater, they make fine wheel guns (revolvers) but I have seen and heard too many horror stories about their autos and even more about their customer service.

The next gun the clerk handed me was a Glock 26. Nice gun...but it felt blocky in my hand. I asked him about the S&W M&P's that were in the next case over...one of the other clerks immediately quipped "Nice choice!". It just so happens they had a lightly used M&P 9c that was very reasonably priced. I examined the gun and it felt fantastic in my hand. The clerk pulled out the case and showed me it came with three back straps: small, medium and large. The medium was on the gun...I asked him if I could put the large on and he obliged. The gun felt even BETTER in my hand!

I inspected the guts of the gun and when I say lightly used, it looked like whomever had owned it fired about two magazines through it total. The gun came with a case, three back straps, take down tool and 2 magazines - 12 round capacity - 9mm (one with a finger rest and one without the finger rest).

The gun is perfect for concealed carry. The magazine without the finger rest was useless to me. Here is my plug for S&W's customer service - I contacted them and they sent me a free finger rest no questions asked. I immediately purchased two additional 12 round magazines (with finger rests), so I now have four mags for the gun. I also picked up a Fobus paddle holster as well for range use - I still need a concealed carry holster but there is no rush as I don't have my permit yet anyway.

I took the gun to the range with 2 boxes of Winchester White Box 9mm Luger 100 round packs. I loaded it up and blasted away. The gun is extremely accurate...I was making excellent groups at 7 and 15 yards - all kill shots (fairly rapid fire). I fed the rest of the rounds (200 total) through the gun with no failures at all. The sites are good but I may upgrade to the night sights when some more disposable income rolls in. The magazines are a bit tough to get that 12th round in but they will loosen up with use I am sure.

The only "weird" thing for me is the lack of an external safety on the gun. I have never owned a gun without one so it will take some time getting used to that. My gun is equipped with a magazine disconnect (which I hate). For those not familiar with magazine disconnects they will not allow the gun to fire if there is a round in the chamber and the magazine is removed. They do make models that lack the magazine disconnect and I would recommend getting one of those.

One nice feature I like but many other folks don't is a loaded chamber indicator. There is a small space located on the slide where you can see the bullet in the chamber if the gun is loaded. Many people feel they allow debris to get into the gun...I like them (nice safety feature) although I would never just rely on that. The only way to be sure the gun is unloaded is to eject the magazine and rack the slide a few times, then partially open the slide and inspect the chamber. THAT IS THE ONLY WAY TO BE 100% SURE THE GUN IS UNLOADED. Also NEVER point the gun at anyone even if you know it is unloaded - basic firearms safety...never take anything for granted.

The gun is simple to disassemble with the included take down tool. I literally have it apart in a few seconds. This is important because the simpler this is the more likely you will clean and oil it thoroughly. I will tell you this. I absolutely could not be happier with my purchase. I have put several hundred rounds through the gun in the last few weeks and the gun has performed flawlessly. I think it will be a great concealed carry piece.

NOTE: I seem to have irritated some Taurus Semi-Auto owners. Listen if your gun works fine that's great, I am happy for you. I am basing my Taurus comment on a few friends input as well as the experiences of some folks on forums and blogs I frequent. As with everything in this world "Your mileage may vary". I am actually looking at buying a Taurus revolver so as I said I am not a Taurus hater. I am sure there will be folks who tell me that S&W sucks. I recommend as with any purchase you do some research and then make your decision. Thanks.