The 10/22 is one of he more popular .22lr rifles on the market today. It is popular for many reasons: simplicity, reliability, accuracy and the plethora of aftermarket modifications that are available for it. This gun is the cat's meow of the .22 world.

When I moved from NJ to SC, I immediately decided to purchase a gun. South Carolina respects our 2nd amendment rights and I intended to take advantage of that. Anyone from NJ knows the story there so I won't go into it. I walked into Wal-Mart like Ralphie from a Christmas Story only my "Red Ryder" was made by Ruger. I went to the counter and asked for a Ruger 10/22 Carbine. The clerk brought one over to me and I immediately said OK where do I sign. I spent $192 bucks for the gun which I thought was a great price. I purchased a Hogue over molded stock for the gun on-line from Cheaper Than Dirt. It was very easy to install...basically take off the barrel band, remove the take down screw remove the old stock, install new one and install the take down screw and she was done.

Here are some pictures: 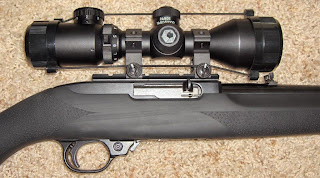 I also installed a Barska 3-9x42mm scope on the gun and a Wal-Mart sling. The gun feels so much more like a rifle with that Hogue stock. The included hardwood stock made the gun feel a bit like an air rifle because it is so light. The Hogue stock gives it some heft.

The gun is an absolute tack driver. I absolutely cannot say enough good things about this gun. Many people dismiss .22 caliber guns but they are an important part of anyone's arsenal. Most .22 caliber guns are cheap, the ammo is dirt cheap and light, they are great to train with (improve marksmanship) and they can put dinner on the table as well. I would not recommend shooting something like a deer but I am sure that has been done. For small game this rifle would be fantastic. It is also fun as hell to shoot. I currently have a few thousand round through my 10/22 and the only failures I had where due to aftermarket mags getting "gunked up". This gun is EXTREMELY reliable...I shoot this until the barrel is too hot to touch and I have never had a problem. They are easy to disassemble and clean which is always a plus. These guns are what I call "no muss, no fuss".

If you are looking for a first gun, a gun for one of your kids or just a fun gun to plink with...do yourself a favor and at least fire one of these before settling on something else.