I finally got my SKS cleaned up and took her to the range. Cleanup went smoothly and was painless. I disassembled the entire rifle down to parts. Below is a photo of the rifle about 85% disassembled. I further broke down the recoil spring into components and also remove the butt pad and the sling hardware as well. 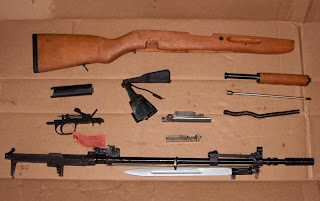 I leached the cosmoline out of the stock by baking it in the oven in a disposable roasting pan. I set the temperature in the oven to 170 degrees and baked the stock for about two hours. Every half of an hour I removed the stock from the oven (with gloves on - HOT) and wiped away an cosmo that had leached from the wood. Once I removed the stock from the oven after the two hours was up, I let it cool. I then used a 50/50 mixture of water and Murphy's Wood Soap with rag to clean the stock further. Once the stock dried completely I wiped it down thoroughly with lemon oil (2 coats) Stock done! I cleaned all the metal part by soaking them in a large tub with a 50/50 mixture of water and Simple Green in it. After about four hours I removed each part and cleaned them thoroughly with a rag and a toothbrush. I then place the parts back in the tub and let them soak overnight. The next day I wiped each part down until dry, oiled what need to be oiled and reassembled the rifle. Below is the end result...looks pretty good if I must say so myself.

Some background on SKS's, they are not all created equally. Avoid Chinese SKS's if you have a choice, they are stamped parts and a pinned barrel as opposed to milled parts and a threaded barrel. They are not a bad rifle but if you can get a Russian, Romanian or Yugo get those first. I have a Yugo which is virtually identical to a Russian SKS. The difference being the Russian barrel is chrome-lined. Chrome lined barrels are nice to have but if you clean your rifle on a regular basis and use non-corrosive ammo you don't really "need" it. To make up for the lack of a chrome- lined barrel the Yugo is built heavier and will definitely feel like a tank when you hold it. I have a M59/66A1 which had improvements put on it from the factory such as a beefier butt pad, night sights, and a grenade launcher. The Yugo is heavier (2 lbs heavier) than the other variants and because of this the recoil on 7.62x39 is almost non-existent. I did research before selecting my SKS and the aforementioned reasons are why I selected the Yugo. I took the rifle to the range on Saturday. I have to admit I was a bit nervous shooting a 50 year old gun that had never been fired before. I was worried about slam fire (it's rare but it happens) which is the firing pin sticking and setting off successive rounds as the bolt cycles. This effectively turn the gun into a machine gun, one that is not under your control. The SKS could slam fired if the bolt is not cleaned thoroughly. The firing pin is free floating and should rattle when you shake the bolt. If you don't get all the cosmo out and debris causes the firing pin to stick...look out! I decided I would manually load rounds into the weapon by hand, not using stripper clips. I place one round in the magazine and with the weapon pointed down range closed the bolt. No discharge...good start...I raised the rifle and pulled the trigger...Boom...also good. I loaded 4 more rounds into the magazine and below are the results at 25 yards. 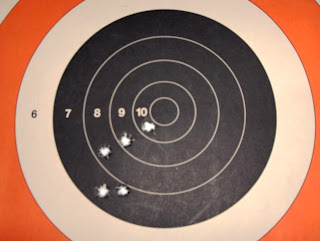 Five rounds in a nice group! The recoil is very light! I was happy as a clam at this point and confidently loaded 10 rounds into the magazine and fired them off one after another. I shot about 60 rounds total, no misfires or failures to eject, in fact no issues at all. Speaks volumes to the design of a gun for it sit in storage for 50 years or so and have it perform flawlessly once you clean it up and feed it some ammo. Overall I could not be happier with my purchase. I recommend the SKS as a rifle to add to your arsenal, especially the Yugo M59/66A1. I may refinish the stock in a darker color as I do like the darker wood on these guns...we'll see. I am definitely leaving it as is, I will not be modifying this baby, I think it's perfect just the way it is.

Link to instructions to disassemble the SKS.

Buy Be A Survivor stuff! ~ Donate to Be A Survivor! ~ Join "The Survivalists"!
Posted by flea at 7:00 AM
Email ThisBlogThis!Share to TwitterShare to FacebookShare to Pinterest
Labels: equipment review, firearms