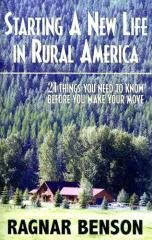 Ragnar's Urban Survival: A Hard-Times Guide to Staying Alive in the City

The book I am reviewing is Uncle Ragnar's (as he is affectionately known): Starting a New Life in Rural America: 21 Things You Need to Know Before You Make Your Move

Logically from the title there are 21 chapters which include:

I happen to be a fan of Uncle Ragnar, although I always take everything he says with a grain of salt. In all of his books he presents scenarios that he says are from his experiences throughout his life. I call bullshit on some of them as they to conveniently aid him with the point he is making.

This book is definitely one of his better ones. It does contain some information that seems to be a rehash from earlier books but it is valuable information and in one spot for easy reference. I especially enjoyed the chapters Water and Septic System, they are full of great information on what to do and more importantly what not to do when drilling a well or installing a septic system. These two items are extremely important because they make up two of the "holy trinity" of getting off the grid. The trinity is Water, Sewer and electricity. If you can be independent of the grid on these three things you are in extremely good shape.

His chapter on Energy and electricity are good as well: generators, wood stoves, propane, diesel, gasoline are all discussed. There isn't as much as I would have liked on solar power. Solar power is a viable solution for basic power needs although the initial expense can be quite high.

He spends A LOT of time of the politics and the social faux pas that one should not commit as a new comer to the rural area you move to. I think some of this information is good but I don't think it is as important as he makes it out to be. (DISCLAIMER: I don't live in the wilderness in Idaho, he does - so I could be wrong about this.)

The bottom line is this is one of Ragnar's better books. He has written over twenty books and this is about the eighth one I have read. I can certainly recommend this book, as I do think there is valuable information to be had. If you have read some of his other books you will most likely enjoy this one as well. Ragnar is well into his sixties at this point so I hope he churns out a few more classics before he call it a day.

Buy Be A Survivor stuff! ~ Donate to Be A Survivor! ~ Join "The Survivalists"!
Posted by flea at 12:27 PM
Email ThisBlogThis!Share to TwitterShare to FacebookShare to Pinterest
Labels: book reviews, preparedness